Over the past few months, I have hinted about a secret project. I can now tell you that I have my first MM Short story being released In a fabulous Anthology.

The anthology will be at the low price of 2.99 with all proceeds going to The Albert Kennedy Trust and The Matthew Shepard Foundation.

And here is a peek at the beautiful Cover!

LOVE FOR ALL SEASONS

RJ Scott brings authors together in an anthology that reveals true love always deserves a happy ending, whatever the season.The Albert Kennedy Trust

With characters who find love in a New York park, or on a college campus, in the middle of a snowstorm or in the heat of summer, ‘Love for all Seasons’ delivers romance for everyone.

Including stories from three authors, new to the world of writing MM romance. 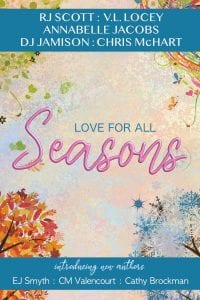 The ice storm of a century hits Missouri.

Winter savvy Lane Jennings is the only one prepared, thanks to a decade in North Dakota. Too shy to approach his drool-worthy neighbor, he’s left fantasizing about him at night. That is until the storm, when a branch breaks free, trapping him beneath. Now it’s up to Lane to save him from his icy peril and care for him throughout the storm.

It was a near-death experience for stunned Jeffrey Nichols. Never had he seen anything as beautifully terrifying as the weather and his neighbor. One threatened his life and the other his secret. He wasn’t sure which was more dangerous, but when Lane gives him a warm shelter through the storm, he quickly realizes he will find out.

Coming soon to other retailers.