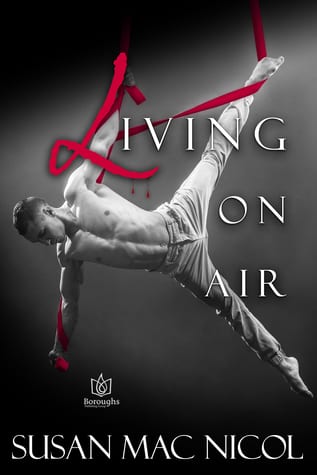 For aerialist, Cary Stilwell, aside from performing forty feet in the air, life holds little comfort until he meets Rhys McIntyre, who punctures all of Cary’s defenses.

Cary Stilwell has been existing since he was ten years old, and each year it gets harder to find meaning in his bleak life. The only exception – his work. As a top-billed aerialist in a popular travelling circus, he enjoys accolades and applause, but little else. When notable photographer, Rhys McIntyre, joins the circus to catalogue its inner workings, Cary fights the attraction that hits him from the moment they meet. But a kind soul wrapped in a beautiful body has a way of battering all the walls Cary has built around his cold, dark heart.

Rhys McIntyre is on his third iteration of reinventing himself. Once a hotdog financier, he embraced his passion for photography and became an eminent war photo journalist. Until one too many bullets lodged in his body, and he gave up the front lines for the softer side of chronicling life. When he accepts the assignment to record life in a circus, the last thing he expects is to find the man crush of his dreams. Except Cary Stilwell is a cold, tortured man who seems incapable of any warm emotion, never mind love. But Rhys is known for his persistence, and this time the pay-off might be more than he could have ever imagined.

This book delves into subjects some people may find disturbing. There are elements of the main characters’ pasts that include paedophilia, the dark side of religion, and the horrors of war. Aspects of the story include self-harm, depression, and suicide, and the book is set in a circus where clowns are featured.

None of these elements are gratuitous, but instead are included because they are part of the human condition, and are essential to our main characters’ journeys. I hope you join Cary and Rhys as they navigate their way to love.

Warning; There is pedophilia, rape, child abuse, violence, and self-cutting. None of these scenes are gratuitous. They also fit into the story and show us Carey’s past and what he went through that makes him how he is today.

Living on air is a work of art in itself. Ms, Mac Nicol has created a beautiful story full of intriguing and quirky characters.  The story is beautifully written and poignant. It is a real page-turner. There is a lot of angst and I wanted so bad to grab care and hold him. I know all about cutting having and a family member with that problems.

This book reminded me of some old movies my hubby and I used to watch like Big Top and The Greatest Show on Earth.

If you like lots of angst, circus stories, unique characters, broken men, friends to lovers and an all over intriguing read this is for you. Bring along the tissue.

Susan Mac Nicol is a self-confessed bookaholic, an avid watcher of videos of sexy pole dancing men, geek and nerd and in love with her Smartphone. This little treasure is called ‘the boyfriend’ by her long suffering husband, who says if it vibrated, there’d be no need for him. Susan hasn’t had the heart to tell him there’s an app for that…

She is never happier than when sitting in the confines of her living room/study/on a cold station platform scribbling down words and making two men fall in love. She is a romantic at heart and believes that everything happens (for the most part) for a reason. She likes to think of herself as a ‘half full’ kinda gal, although sometimes that philosophy is sorely tested.

In an ideal world, Susan Mac Nicol would be Queen of England and banish all the bad people to the Never Never Lands of Wherever -Who Cares. As that’s never going to happen, she contents herself with writing her HEA stories and pretending, that just for a little while, good things happen to good people.