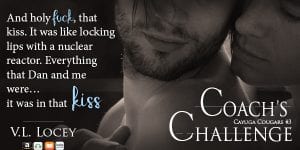 Before we get to the interview with Vic and Dan, I’d like to thank Cathy for being brave enough to have Victor over. Not everyone is willing to deal with his mouth, and for that I commend Cat highly. I did have a long talk with Mr. Kalinski before handing over the list of questions, and he promised to be nice. You can take that with a grain –or pound- of salt. Since Dan is riding shotgun I wager he’ll keep his husband in check.

Thank you so much for dropping by and I’ll now turn you over to Vic and Dan. *nervously chews fingernails*

Dan – “Okay, so we got like this huge list of questions. I’m going to just random pick ones.”

Vic- “Eenie-meenie works for me. It’s how I chose my date to the senior prom.”

Vic – “Seriously, I did. There were two chicks vying for my attention. I kind of had my eye on this Skip dude on the baseball team, but he was straight, so I did an eenie-meenie between Diane and Sue.”

Dan – “But I thought it was between Sue and Diane?”

Vic – *shrugs* – “The tiger never picked either of those two. Rachel was pushier, and easier.”

Vic- “Oh, like no one out there knows a dude who went out with a girl in high school because she put out. Shit, give me a break. Back in those days, I’d have fucked anything breathing. And don’t say I’m still like that, babe. I’m totally into the monogamy now. I liked it so I put a ring on it.”

Dan – “Okay, so, since we already offended half the people reading this…”

Vic- “Might as well weed the weakest of the flock early.”

Dan – “I’m going to pick a few of the great questions Cathy sent us.”

Dan – “Uh-huh. Oh! This here’s a good one. What did you eat for breakfast and did you make it yourself.”

Vic- “I had Cream of Wheat because it’s colder than my therapist’s heart in Cayuga of late. Did I make it? Yes. Yes, I did.”

Dan – “Did you clean up after you slobbered Cream of Wheat all over the stove?”

Vic – “That wasn’t part of the question. I think you’re making shit up.”

Dan- “Scraping burnt on Cream of Wheat off the stove sucked.”

Dan – “Only after you made me tie an apron on.”

Vic – “Yeah, you in nothing but an apron turns me on. I’m getting half a hard-on just—”

Vic – “Are these legitimate questions?”

Vic- “Huh. Okay. Well, I put one sock on at a time then my shoes. This sounds like something I’d hear in therapy. Like its some sort of demented test some headshrinker dreamed up to gauge how close a person is to committing assault with a winter squash upon an innocent bystander.”

Dan – “Oh this one is rich. Do you iron your clothes or do your own laundry? No, he does not do either. His fingers are too precious to touch an iron or washing machine knob.”

Vic – “I’m picking up some residual upset in your tone, my beloved.”

Dan – “Don’t never leave a mess on the stove like you did this morning. That sucked.”

Vic – “So did I, and damn well judging by how hard and fast you came while strangling that cute little green scrubber.”

Vic “I promise. So, anymore questions? Are we done?”

Dan – “No, not yet. Let me look them over. We know you’re married, we know you own your home, and we know you hire Lila’s boy to mow the grass. Oh, how about this one? Have you ever eaten a carrot right out of the ground?”

Vic – “They grow in the ground? We didn’t have much gardening or ground in Englewood, so I wasn’t aware.”

Dan – “Okay, now you know that about carrots. You watch them old Bugs Bunny cartoons all the time.”

Vic – “Well, they could have made that shit up. Them old cartoon dudes smoked a lot of the devil’s tobacco.”

Vic – “Yeah I am. I told you I had like a five question patience limit and we’re already forty questions past that.”

Dan – “Just one more and then we’ll go home and watch South Park.”

Vic – “Whoa. We jump from carrots and socks to greatest fear? What the fuck?”

Dan – “Vic, answer the question or we’ll be sitting here until you’re old and gray.”

Vic – *huffs and sighs and wriggles in his chair* “Losing you and Jack. There. The world knows. Can we go home now?”

Dan – “Hey, you know you ain’t never losing me. I love you like crazy.”

Vic – “Yeah, I know. Don’t mean I don’t fear doing something that slaughters that sainted patience of yours and you pack up and head north. Like the Cream of Wheat incident of 2018.”

Dan – “I don’t figure I’ll ever leave over Cream of Wheat. I’ll just bitch about it.”

Vic – “Want to ditch this interview shit and go home? I’m thinking maybe I tie on the apron this time and you bend me over the dishwasher and smack my ass red with a spatula. Yeah, I see that gleam in them pretty blue eyes of yours. You’re all over that spatula spanking.”

Dan – “We got to quick say thanks to Cathy and tell the readers that Coach’s Challenge comes out tomorrow. Should we talk about the book a bit?”

Vic – “Nah. Let V.L. tack on the blurb and whatever links she wants and call it good.”

Dan- “Okay, I guess we can do that.” *tosses paper filled with questions into the air and jogs off to catch up with Vic* 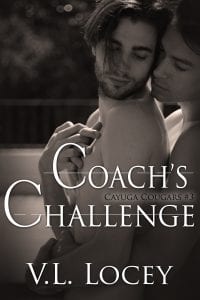 Blurb- Victor Kalinski and his husband, Dan Arou, are living the dream. Married for over a year now, the couple have settled into life in Cayuga surrounded by friends, family, and a team that’s poised to make another championship run. Each man is enjoying professional success as well as personal bliss. Who knew life in the suburbs with a spouse and a child could be so darn satisfying? Not Vic. K, that’s for sure.

The happy times are about to turn rough, though. The Cougars have picked up a new player, Sander March, a brash young center whose sass, skill, and attitude can rival Victor’s. When it’s revealed that this new player and Dan have history, tensions begin to rise between the newlyweds.

As Victor and Dan work on those issues, the one person Victor never thought he would meet arrives in the small New York hamlet and proceeds to flip everything in Vic’s life upside down. Can Victor and Dan’s marriage withstand what life is about to drop on it, or will the challenges be too much for them to handle?