Justice Volkov is the youngest Alpha Zenith to ever lead the wolf shifters. Following in his father’s large paw prints was a responsibility he met head on. Now at age thirty-three, he is alpha of the alphas. As a direct descendant of the original Siberian pack, his wolf is bigger and stronger than Justice, himself is sometimes able to control.

“His wolf howled long and hard but Justice kept it inside. It felt like a bass drum beating against his rib cage. The harsh breaths, angry snarls and the determined pacing inside him was overtaking him. All the while… his mate kept calling.”

Justice takes his role of leadership and his legacy very seriously. He has little time for romance, not to mention a true mate. His packs are his priority. With a human government trying to regulate them, an uprising of rogue shifters, and a violent team of scientists trying to experiment on them, Justice has his hands way too full.

Chadwick ‘Wick’ Bentley is not enthusiastic when the captain of his escort tells him he has to leave his comfortable London home and go back to the States. As the Vampire King, he has no choice but to get his species back in line before they cause anymore chaos. At over two-hundred years old, Wick is no one to trifle with, but his smooth, charismatic manner makes him quite unique, despite the negative reputation vampires have. Wick has had nothing but time up to this point. He doesn’t feel the need to make issues pressing. Nothing is urgent in his life. Until he meets Justice. His beloved.

“Natural enemies can’t be mates.” Or so Justice thought. He knows his skepticism and rejection is hurting his mate, so while he fights their connection, Wick gets help from a source very close to Justice to help him win his beloved’s heart. Wick is a force all on his own, but when he’s blessed with a special gift from the Mother herself, not even Justice’s powerful wolf can prevent the prophesy from being fulfilled.

This story DOES NOT contain/mention MPREG.
No multiple pairings. It does not end on a cliffhanger and has an HEA.

Warning: This book is MM paranormal: If you DO NOT like hot, alpha men shifting into large wolves, or vampires feeding from their mates, this may not be your read.

Cover love: This cover is sexy and I can see both Justice and Wick perfectly.

. I love A.E. Via andVampires and Shifters. So I was thrilled to get a chance for all three rolled up in one. I am going to do this a little different. There are some great characters in this book beginning with Justice, the Alpha Zenith of all wolf-shifters. 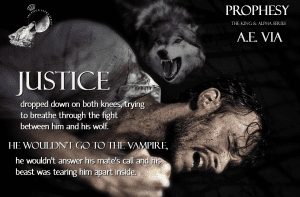 Then we have Wick the vampire king.

They are brought together when the wolves and vampires begin fighting and kill an innocent police officer. They find out that they are not only mates but true mates. 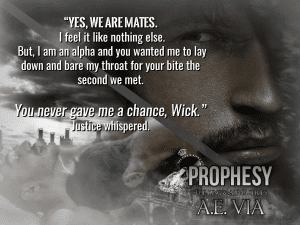 Together they have to find out who is behind the uprising and why while dealing with two Alphas becoming mates.

This story is so good. not only did I love the characters but the plot was intriguing and of course the sex was smokin hot. I have been looking for a shifter or Vampire book that is out of the norm and finally, I get both in one.

This is the first of a series so there is a lot of backstory and buildup for each character. I felt this could have been cut down a bit and the would have like to have seen more of the actual action of the plot instead of it being told how things ended up. . However saying this I loved the romance and cannot wait to see the other stories in this series.

If you like shifters, vampires, enemies to lovers, true mates and some hot man-sex you will like this one.

A.E. Via has been a best-selling author in the beautiful gay romance genre for four years now, but she’s no stranger to MM. She’s been an avid reader of LGBTQ Romance for over fifteen years before she picked up her laptop to place her own kiss on this genre. She’s also the founder and owner of Via Star Wings Books, having published a couple great new up and coming MM authors.

A.E. has a Bachelor of Arts in Criminal Justice from Virginia Wesleyan College that she used to start her own paralegal firm after she graduated in 2008. She spent five years preparing and filing bankruptcy petitions for struggling blue collar workers who couldn’t afford to file with a lawyer. It was a rewarding and satisfying career… but another path called to her. Writing.

A.E.’s writing embodies everything from hopelessly romantic to adventure, to scandalous. Stories that often include intriguing edges and twists that take readers to new, thought-provoking depths.

Now that she’s gotten over her 10 books published hump, she’s kind of known now for her hardcore, play rough and love hard, bad boy, alphas. However, she does like to push herself to step out of her comfort zone, exploring with different tropes, but she won’t push herself into a whole other genre. She’s head over heels for MM romance and has tons of more hot stories to tell.

Be sure to visit Adrienne on her social media pages and subscribe to her newsletter to never miss another release date! Go to A.E. Via’s official website http://authoraevia.com for more detailed information on how to contact her, follow her, or a sneak peak on upcoming work, free reads, VSWB submissions, and where she’ll appear next.