Let’s give a warm welcome to Susan Mac Nicol and her opinion on having online friends.

I want to talk a little bit about virtual friendships and making friends via social networks. Yep, those ones you make on Facebook and other social networking sites. Now some people have questioned the use of the word ‘friend’. They say, ‘How can someone you’ve never met be your ‘friend’, someone you only know over the ether waves and even then, you have no idea who they really are.  Man, woman, pervert, paedophile, priest, business man, serial killer—true, you have no idea who they really are. A lot of them you have no idea of their gender, and the number of nom de plumes abound. There are super heroes, book characters, film-stars and even cartoon characters.

The word friend is defined in the dictionary as ‘a person with whom one has a bond of mutual affection, typically one exclusive of sexual or family relations.’ It’s a very broad and sweeping definition and in my mind, it certainly applies to those people with whom we strike up a relationship over the social airwaves. I talk to people every day who I consider friends. People who share their stories and their lives with me, their ups and downs, their successes and failures, their daily strife and their dreams and aspirations. I have people I know in ‘real life’ who are not as good as friends as these others.  I have people who know me personally and face to face yet have never bought or read any of my books and aren’t really interested in what I do because it’s out of their comfort zone.

And then I have people who private message me, sending me personal voice messages of support and whenever I’m down, seem to pick up on it and let me know they are thinking of me.

Personally, I have made some of the best friends ever via Twitter and Facebook. People who are now face to face friends and where the relationship has developed to such an extent that it gives me a warm and fuzzy feeling.

I have wonderful fellow authors who give me advice on areas they are more expert in and others, professionals in their field, who do the same and give up their time to make a meaningful contribution to something I’ve written. I have fellow authors who give me their time and knowledge and expertise and counsel to try and make me a better and more marketable writer despite the fact they have their own books to promote and their own businesses and lives to live.

So the next time someone face to face says’ You and your stupid Facebook and Twitter friends, why don’t you get a proper life’, just look them in the eye, and say ‘Have you read my books, the ones I slave over? Have you helped me out recently when I was feeling down, sent me a funny message to cheer me up? Have you heard my tales of woe and actually listened instead of telling me all yours?”

If the answer is No, then don’t feel guilty for having this world of virtual friendships. Whatever keeps you going and happy, it’s worth it if it means something to you.

Thank you, Susan, for this lovely insight and I want to say thank you for being my friend even if we live countries apart!

Now for what we have all been waiting for! Book Nine in the Men of London series!


Kyle Tripper has led an interesting life. Currently the manager of
London’s famous Club Delish, he used to be a croupier extraordinaire
in Las Vegas. But not everything in that life was so glamorous; his
ex was a piece of work. Now gun-shy, Kyle hopes there is someone
special out there for him, and secretly wishes it’s luscious
paramedic, Eric Kirby.
WITH CARE
Every day Eric Kirby goes through the motions. Yeah, he saves lives, and,
sure, he makes a difference, but he doesn’t feel it anymore – not
since he lost his one true. But, when he meets wild, flamboyant Kyle
Tripper and learns there’s a skittish, apprehensive man beneath the
bold façade, the best of Eric’s protective nature kicks in and opens
his heart to a new love.
Goodreads * Amazon
How about a little more?

Around ten that night, Eric walked into Club Delish to find it in full swing. He grinned wryly. Life carried on regardless of the owner being in hospital.

Determined to find Kyle, Eric manoeuvred through the writhing throng of half-naked, sweaty bodies, pouting drag queens, and men in various stages of grinding and sex play on the dance floor. He had a feeling he knew where to look.

Sure enough, Kyle was in Ryan’s office, standing with arms folded across his chest as he stared out of the large observation window down at the mass below. Eric couldn’t help but notice the strain of Kyle’s shirt across his shoulders, sleeves rolled up the elbows. His pert arse filled out his well-fitting trousers, one foot tapping to the faint strains of the music floating up from below. His hair colour had changed once again since Eric had seen him last. It was still a deep dark purple but now featured lilac streaks at the tips, and artful splashes that looked casually painted in.

Eric knocked and cleared his throat, announcing himself, knowing Kyle was skittish. Startling the man was the last thing he wanted.

“Kyle?” He waited as Kyle turned swiftly and a look of relief passed over his face when he saw it was Eric.

“Hi. What are you doing here?” Kyle moved away from the window and smiled softly. “Can’t keep away, huh?”

Eric walked into the room and laid his jacket on the chair. “I wanted to see how you were doing. And find out if there was any news about Ryan. I imagine things have been a little chaotic here today.”

Kyle waved a black fingernail-tipped hand. He had long fingers, and Eric had seen their dexterity first-hand when Kyle had done his card tricks. A fleeting flash of lust passed through Eric as he wondered what those fingers would feel like milking his cock. 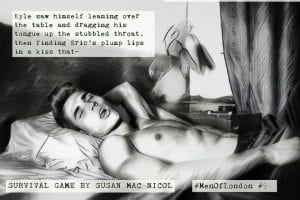 
Lover of angst and conflict, she enjoys putting her characters through the
emotional wringer and bringing them out the other side with an HEA or
at the very least, a HFN.
Sue is a PAN member of Romance Writers of America and also of the
Romantic Novelists Association in the UK. She’s also Editor in
Chief at http://www.divinemagazine.biz, an online LGBTQ e-zine, and
she’s a Charity Board trustee at http://www.beingmecampaign.com in
London.
She’s passionate about research for her books and has stayed in a circus,
taken lessons from a blind person on how it feels to be non-sighted,
and travelled to a lighthouse with maintenance crew to see first-hand
what it’s like inside. She’s also written a screen play with
Hollywood actor and heart-throb Nicholas Downs, with a view to taking
her latest release, Sight Unseen, to the big screen.
Website * Facebook * Twitter * Instagram * Amazon * Goodreads

Follow the tour HERE
for exclusive excerpts, guest posts and a giveaway!
a Rafflecopter giveaway
NOT READ THE SERIES OR MISSED ONE
Add to Goodreads here