A Little Message from A.E. Via.

I’m back with a new release from my best-selling MM series, Nothing Special. I must say it was a blast writing these guys after so long. People have asked why it took a while to get this next installment out and I can only say because I wasn’t sure I wanted to continue with the series. It took a lot of thought – but to my God and Day lovers – I’ve decided to commit to at least two more books in this series. I hope you like this one. Some have classified Nothing Special V as my love letter to my fans – I adored that compliment because it’s accurate. I wanted to give you all a little of everything and every character from the previous books. A glimpse of everyone’s life and what’s been going on with them. I have several POVs in this installment, but not in a confusing way. I love to give the reader a full connection, a peek into other character’s head, and I believe the fans of this series appreciate that. As an avid romance reader myself, it’s one of my pet peeves to only get one point of view in a romance novel. I feel like there’s so much missing when I can’t connect with the other MC. Anyhoo… this isn’t about my likes. It’s about you. So I’ll shut up and let you read the blurb. If you like what you see, pick this one up. Don’t forget to let me know what you think. 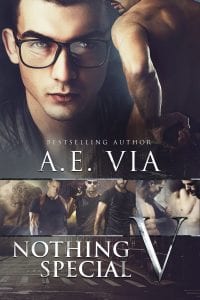 The boys are back and fiercer than ever!

Atlanta’s notorious narcotics task force is at it again. They are stronger, bigger, and better than ever. Especially when a city councilman sends RECON Marine, Edwin Steele – who’s been blacklisted from his Oakland department – to join the team. God and Day weren’t recruiting. They have a lot on their plates, like the fact they’re supposed to be getting married soon. They don’t have the time or the patience to integrate a decorated war hero with a slight chip on his shoulder into their well-oiled machine.

A hothead that’s uncontrollable and terrible with authority… but wasn’t that their team motto?

Steele was ready to hang up his shield. He was done fighting with bigoted bastards that couldn’t respect the job. He was good at fighting; he just needed the right team to fight with. When his uncle – City Councilman, Rasmus Steele – shows him a video of God’s team in action, he knows right away; it’s where his nephew belongs in order to restore his faith.

Steele pointed to the driver, a behemoth of a man wielding those massive firearms like a true beast… like a soldier. “And him. Who the hell is he?”

Steele was skeptical about his new placement, but when he meets God’s technology specialist/computer genius, “Tech,” he’s willing to give it his all, and he definitely shows and proves.

Tech is stunning. His sweater vest and khakis, a stark contrast to the blue-jeaned roughnecks he works with. A beautiful sheep amongst the wolves. Steel thinks there’s no way the brilliant man would be interested in a hardhead like him, but Tech has a few badass hidden talents of his own and manages to surprise him… surprise all of them.

This story is a part of a series but can stand alone. It does not end on a cliffhanger and has a HEA. There are no multiple pairings in this novel.

You can buy a copy at

Here  is a little more of Nothing Special V 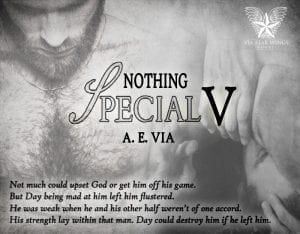 “It’s not important.” Both their voices were low as if there were someone else around to hear.

“I didn’t ask if it was important.”

“This is my job and I do what I’m required.”

“There’s no but. It’s nothing. I’m happy where I am.” Tech looked down at his wrist, which was still in Steele’s grasp, but instead of just holding it, Steele was rubbing his thumb across his pulse, carefully watching him. Tech exhaled slowly. He could feel himself vibrating with hunger for this man. He wished he could stop it. All he could do was pretend he wasn’t fazed by it all. By Steele’s magnificence. Yes, he was just a man. An amazing man who wasn’t afraid to risk his life for a stranger. Who fought for something bigger than himself. That meant something to Tech… it meant a lot. Steele was the exact type of man, soldier, like the ones that’d tried to save his brother in a war he should’ve never been in. Even though that black ops team wasn’t able to save his brother’s whole squadron, they’d saved a lot of them. Steele was that type of man, and it made Tech feel empowered just being near him. Not wanting Steele to see his infatuation, he tried to appear casual.

“You are lying to me.” Steele stood up and crowded into Tech’s smaller frame, moving him back against the cool brick wall. Trapping him there, Steele’s chest persistent against his own. So close together, Tech could feel the solid planes there. Could smell the scent of the masculine soap Steele washed with this morning. He held the back of Tech’s neck in one hand and pressed the back of his other hand up under his chin, just to the left of his Adam’s apple. Two fingers pushed against the pulse now throbbing just beneath the tender skin. Steele’s touch burned in a delicious way. His head was lowered, that raspy stubble scraping against Tech’s smooth temple, his intense eyes closed in deep concentration while Steele broke apart the lie Tech was trying so desperately to construct.

“What’s not all, Tech?” Steele spoke. His mouth moving against his temple, his voice coarse and smooth at the same time.

“I told you. Nothing. I misspoke.” Tech shook against Steele’s proximity, begging his lower body not to react. He felt the back of the two fingers push in deeper, forcing him to lift his head.

“You’re lying,” Steele hissed. He flipped his hand over and spread it out over Tech’s throat, those two fingers still pressed over his pulse while the others rested over his Adam’s apple. “The way I’m touching you right now. Is it turning you on?”

“What? No.” Tech laughed nervously, his hands lying limp by his side, unsure what to do with them.

He felt Steele’s lips curve up. Did he know Tech lied about that too?

As A.E. Stated in her opening in the post, this is written in multiple views and it is easy to follow. Each chapter or viewpoint is marked with the name of whose view it is in. We get more of God and Day and  Rux and Greene. We get lots of insight into their home life and a happy surprise with God and Day.  I think getting to see these sides of these four men it makes them more human and realistic, not just the bad boy cops they are. An added surprise was getting to see a little more Preston and his two men. I have to say I was extremely happy as I adored Preston. In case you don’t know who Preston is he started off the series in a Standalone book You Can See Me. This is where we meet day for the first time.

Tech (Shawn) was introduced a book or two ago and is techy behind the scenes man. In this book, Tech wants to be more and has been taking classes on his own to try to get in the field. We also get a new agent, Steele who fits in perfectly with Rux and Greene.  Though this book is a lot of romance and inside their home lives, there is some suspense and action as well. I will say I would have loved to have seen more of Shawn in the field and a bit more action.

I am super excited that there is another book on its way!

If you like police, special forces, Alpha male detectives, action, romance and some good old hot man-sex, you will like this.

I highly recommend this series. In case you haven’t read any of these books and are looking for a good series. You can find them on good reads here.

You can find the first four books here separately or in a set.

Here is the link to  You Can See Me with Prescott and his men and where we first meet Day.  This was the first AE Via book I ever read and one of my favorites.

A.E. Is generously giving away a $100 Kindle Gift Card.

Wow! What a great prize!

Visit my site to learn more! Go to A.E. Via’s official website  for more detailed information on how to contact her, follow her, or a sneak peek of upcoming work, free reads, VSWB submissions, and where she’ll appear next

You can Stalk A.E. 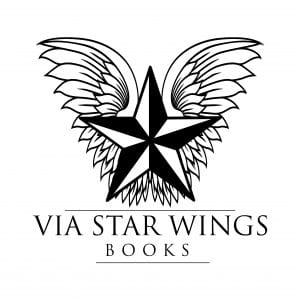