I AM THANKFUL FOR…

I am so thankful for everyone who has and currently is supporting my creative efforts. To start, a big thank you to my family and early neighbors who were captive audiences to my childhood shows that included a Nativity play in my cousin’s garage, a one-man show with me waving a hat and cane, and full scale musicals in a neighbor’s garage starring my sister and me wearing our parents clothing. Of course a huge thank you also to my spouse who is my partner in all things, including editing my books!

Next, a big thank you to my professors in college who complimented and gently critiqued my acting in college mainstage and classroom productions. As a college professor/department head now, I try to give back by helping my students find their special talents and believing in them.

Thank you to the many actors I worked with like Bruce Willis, Nathan Lane, Rosie O’Donnell, Holland Taylor, and Jason Robards who recommended that I further explore my creative gene. And to my then manager who further nudged me to give writing a try. A big thank you to the audiences of my plays, who laughed, cried, and cheered at my words.

A huge, heartfelt thank you to the readers of my novels who tell me they love the humor, drama, plot twists and turns, romance, mystery, and surprise endings in my books, including begging for more!

Finally, a big kudos to the reviewers and other writers, like Cathy Brockman, who have supported me from the beginning and continue to read and review my books.

I hope each of you is thankful for something this month, and that the people around you support and cheer on your unique you. 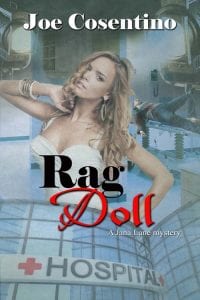 Murder, romance, and scandal on and off the set of Jana Lane’s new murder mystery television show. America’s most famous ex-child star Jana Lane is starring in The Detective’s Wife, a murder mystery television show in 1985. Guest starring on the show is Christa Bianca, a rags-to-riches ingénue who has flooded the entertainment press. Life imitates television as cast members are murdered, and once again it’s up to Jana, along with sexy ex-detective Chris Bove, to save the day before the lights fade to black.

You can buy a copy

Here is a little snippet of Rag Doll

Jana and Bove did the scene again with a thin piece of gauze over the camera lens aimed at Jana.

Ah, the plight of a middle-aged actress.

Jana felt even better about that take. Their relationship worked, and the energy bounced back and forth between them almost effortlessly. Again Jana wondered what it would be like sharing her days with Bove and kissing Bove in bed before sleep each night.

Herm’s call for action brought Jana back to the scene. Bove’s close-up was even better than the first two takes. It was as if they had been married for years with an easygoing yet emotional rapport.

Bove smiled at Jana. “Right back at you.”

As she started to rise from the bed, Jana spotted Christa in the distance with a look of horror on her face.

The young woman screamed as a lighting screen headed straight for her. Stu Silverman, standing next to Christa, noticed and pushed Christa out of the way in

the nick of time. The screen crashed to the floor inches away from Christa’s feet. Standing on the other side of her, Andrew Bianca took his wife in his arms, and she

wept on his shoulder.

Rag Doll is the 5th Jana Lane Mystery. It stands alone well. Jana is a middle-aged child star that has just gotten back into her career. After two movies and a Broadway play, she is now doing a TV series. Her youngest son B.J. who was in the Broadway play with her has a part as well. Jana is also hiring a new Nanny for B.J. On set she meets her guest star Christa, Christa’s agent Stu. Her husband Andrew and her Uncle Nick an older, havewashed-up, alcoholic star. There is also two couples, and her on-stage husband Bove and his wife or should I say soon to be ex-wife Karen. There is also the director, a makeup woman and a props manager.  Each of these characthaseither a charming or mysterious personality. I forgot Jana’s agent Simon. He is hilarious. also flamboyant and colorful. Literally.

The plot of the story is similar to the other books. Once Jana signs on for a job she begins having nightmares. People on the set start dropping dead and she finds clues  until she solves the case.

The mystery itself is always good. Just when you are sure you know who did it they drop dead or something else happens to change your mind. Again…I was wrong and shocked at the outcome.

There is also  usually a subplot with Jana helping the LGBT community. This time her project turns out to be AIDS awareness. There is also a little about Breast cancer as well. I love how the author takes causes and integrates them into the story with things to help us learn about them.

The story is a mystery, but Joe has a way with humor that keeps it light-hearted and funny, even though at times there are some deep issues like the AIDs.

I love a good mystery/suspense and also a good comedy and Joe has a magical way of weaving them together into the perfect blend.

If you like colorful characters, mystery/suspense, cozies, humor, attention to detail, and cute kids (B.J. is stealing the show!) This book is for you.

Bestselling author Joe Cosentino won Divine Magazine’s awards for best mystery novel, best humorous novel, and best contemporary novel of 2015. He is the author of the Jana Lane mysteries: Paper Doll, Porcelain Doll, Satin Doll, China Doll, Rag Doll (The Wild Rose Press). The Nicky and Noah mysteries: Drama Queen, Drama Muscle, and the upcoming Drama Cruise and Drama Luau (Lethe Press). The Cozzi Cove beach series: Cozzi Cove: Bouncing Back, Cozzi Cove: Moving Forward, and the upcoming Cozzi Cove: Stepping Out (NineStar Press). And the romance novellas: In My Heart anthology (An Infatuation & A Shooting Star), A Home for the Holidays, and The Naked Prince and Other Tales from Fairyland (Dreamspinner Press); and The Nutcracker and the Mouse King (Eldridge Plays and Musicals). As an actor, he has appeared in principal roles in film, television, and theatre opposite stars such as Bruce Willis, Rosie O’Donnell, Nathan Lane, Holland Taylor, and Jason Robards. Joe is currently head of the department/professor at a college in upstate New York, and is happily married.

Praises for The Jana Lane Mysteries

“Set on Broadway in 1984, “China Doll”…combines plenty of drama with a mystery complex enough to keep the reader guessing. Every member of the cast has not only some depth but intertwining romance and quirk to spare. The romance surrounding Jana as she struggles between remaining faithful to her husband and the feelings that stir around Peter will leave the reader torn until the end. With a smooth pace, intriguing mystery, and plenty of danger…An excellent read for lovers of mystery and drama!” Ind’Tale Magazine

“Joe Cosentino never disappoints…his novels are superb. I find myself addicted to each story that he writes, and once he writes a new book the characters end up being added to my all-time favorite lists. There’s plenty of action, intrigue, and murder to go around. A talented writer whose words constantly draw me in every time. I look forward to the next masterfully woven story in this series. Jana Lane is definitely a new female sleuth that should be on everyone’s reading list. I highly recommend China Doll to readers worldwide.” Urban Book Reviews

“A book that will captivate any reader! A page turner that won’t let you go! This is one author you can always depend on to publish a good read!!” Stormy Nights Reviewing

“Joe Cosentino is a brilliant mastermind when creating the perfect mystery series. In each novel in this intriguing series of his, Jana Lane Mysteries, readers are blown away by his writing. The instant readers jump into Joe Cosentino’s fictional world, the danger feels real, the suspense is killing, and the plot moves so fast. Action, lights, camera!”  “A fast-paced murder mystery that readers will easily fall in love with…and one they can’t live without. Overall, I highly recommend this new title in the Jana Lane Mysteries and look forward to the next best adventure from Joe Cosentino.” Urban Book Reviews

“Murder, mystery, and suspense are high inside of this brilliant masterpiece by Joe Cosentino.” “Every page fills the readers with intrigue.” “Edge of your seat mystery that lures readers instantly.” “Once you read it, you can’t put it down.” Urban Book Reviews

“Porcelain Doll hooks from the start with characters behaving badly, all of whom have life-changing secrets.” “The story includes a nice arc, well-developed characters, and a few unexpected surprises.” InD’tale Magazine

“Joe Cosentino knows how to keep his readers’ interest with every page.” Urban Book Reviews