Hi Everyone. I am here to help my lovely friend and one of my favorite authors celebrate a release day.  I have been waiting on this one for a while. 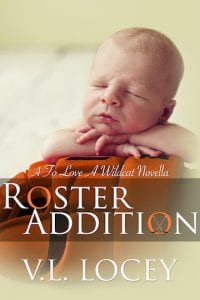 Blurb: Veikko Aho, Wildcats star goalie, and his wife Liz are about to add a new player to their family roster. The open adoption of Maggie and Derrick’s granddaughter will help to heal the gaping hole infertility has left in the Aho’s life. Finally, that huge mansion on the Main Line will hear the sweet laughter of a child.

But the birth that the Aho’s are so looking forward too seems to be stirring up some anxiety and unspoken fears for the grandparents. As the seemingly endless night of labor drags on, power struggles that threaten to break up a long-standing friendship rise to the surface. Can both families put aside their petty differences or will this precious new Wildcat tear them apart?

A Little from Derrick

The phone died just as I knew it would. “Love you too, Mags,” I said anyway then shoved my deceased phone into the front pocket of my trousers. A stiff wind whistled through the parking lot, making me move a little faster. Stepping inside the Doughnut Den, warm, moist air and the smell of freshly made doughnuts embraced me. My belly rumbled as I stepped up to the counter to order coffee for four adults and a box of a dozen assorted doughnuts. The cashier was a tiny little gal who seemed a little intimidated by the ugly old bear buying glazed and chocolate-covered. Even when I give her a smile and a tip, she hung back, never looking me in the eye. I was used to it. Ashley, the girl having my grandbaby, she was real quiet and backward around me for months until she got to know me better. Guess I was one scary type. Must be the beard and scars. You don’t play hockey for twenty years and not get battle scars.

I took my purchases to a table by the window so I could see Aho’s spiffy white Jaguar XJL Ultimate when he pulled up. Imagine my surprise when I saw the goalie climbing out of a metallic blue BMW coupe about ten minutes later. Aho took a moment to button up his long black coat then tuck a white scarf dangling around his neck into the front of his coat. He hurried across the parking lot, looking like some sort of high paid fashion model instead of a hockey player. I reached up to rub the knob on the bridge of my nose, a reminder of ten stitches needed after taking a high stick from some chucklehead from Boston. Hell, that musta been ten years ago now. Veikko, he didn’t have no scars. Not a one, and that was good. If you’ve never seen pictures of the old goalies back before they started wearing masks, you’d be terrified of what you were seeing.

“I was wondering if you’d be having a snack while you waited,” the Finn said after he entered the shop. I held up a half-eaten peanut-butter crème filled. Aho smiled then walked up the counter. That little girl didn’t seem to have any troubles chatting and blushing all over Veikko as he ordered drinks.

“I already got you some,” I informed him when he walked over to the table by the window.

“Ah, well, we’ll have refills.” His eyes dropped to the open box of doughnuts.

“Dig in,” I said then pushed the last bite of my peanut-butter crème filled into my trap.

“Thank you, but I’ll have to pass,” he said in that precise, refined way he spoke.

“I ain’t playing no more so I can grab a sweet now and again,” I informed him.

“It looks like you have grabbed five sweets,” he countered then gave me a wink. I closed the lid then pushed to my feet. The man was just rubbing me wrong for some reason. Probably, I was still pissed off about the train ride and was taking that out on him. “I envy you,” Veikko added as I gathered up my dirty napkins. My gaze jumped from the trash in my hands to the Finn. There wasn’t one damn thing I could think of that Aho would envy me, or anyone else, about. “You’re free now to enjoy the delights of life and not be so concerned about a few extra pounds and how they slow you down on the ice.”

“Oh, yah, being retired is about the best thing ever,” I lied like a rug then whipped my garbage into a can by the front door. Out into the cold we went, both of us carrying containers with coffee, and me with a box of doughnut under my arm. “So where are we, you know, in terms of the baby coming?”

“Not far yet,” he replied, turning his face from a gust of wind that sent papers flying up over our heads. “Elizabeth tells me that first time births can take many hours.”

“Yah, so I hear.” We stopped by the blue BMW. “Where’s the Jag? I didn’t think you ever left home without her.”

Aho grinned at me from across the roof of the Beemer. “That was before we were to be parents. As much as I love my Jaguar, it is not exactly the kind of car one carries a child in, is it?”

“Guess not,” I replied then slowly lowered myself into the car. I looked into the backseat, hoping to find a place to put the doughnut box, and saw a brand new car seat all strapped in and ready for use. I kid you not, seeing that car seat hit me puck between the eyes.

Roster Addition is a novella that goes with the Wild Cats Series.

In this book Ashley goes into labor early. We get several views in this book, Derrick, Viekko, Maggie, Liz and a new character at the end.

To fill you in if you haven’t read the series, Ashley is a pregnant teenager, the baby’s dad is Trevor Maggies teenage son. Trevor and Ashley decided to give the baby up to adoption to Viekko and Liz since they weren’t able to have their own. Derrick and Maggie are dealing with the fact they wanted to raise the baby as their own grandchild, and derrick is really struggling with a few changes Viekko has made.

The book is very heartfelt, has a lot going on, and a few surprises along the way.

I’ve been waiting on this story and wasn’t let down and the tease at the end makes me want the next Venom book right now! 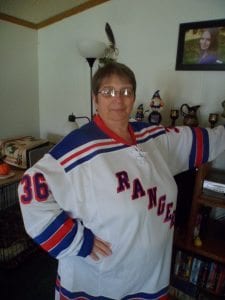 Roster Addition (A To Love a Wildcat Novella)

Coming October 12, 2016…On Broadway (part of the Changing on the Fly M/M hockey romance charity novella)