Where did it all go? ~~Cinco De Mayo feast~~#foodiefriday

Hi Y’all. It has been a while since I posted a Foodie Friday. You may wonder where did it all go? To be honest, I thought about dropping it, but it’s one of my favorite posts. The reason I have been considering dropping is I was recently sued for using a photo in a post. I did not buy the rights to it and had no Idea it was from a site you have to buy it. I posted a recipe and used the photo from a food site. I did post that sites link.  I was so upset over the ordeal that I decided it’s best not to post any pictures I don’t take or buy.( some of those I am still a  bit cautious).

I finally took care of the issue, pulled all pictures and went through my blog and pulled all posts up until this year. I found it’s  much easier to do that than read each post and try to decide if I used an unauthorized photo. I cannot afford another one of these suits.

This week I decided to bring back the weekly posts. I will be posting only recipes I actually made during the week. If I use one that is not mine, there won’t be a photo.

I love making themed meals, and one of those is always Cinco de Mayo. This year I chose baked chicken chimichangas, Refried beans ( I used canned and added cheese) and Spanish Rice. The meal went over well. The kids loved the Chimichangas, a couple liked the beans, the rice not so much. 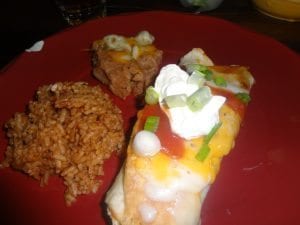 I looked at several recipes on the web and combined a few to make my own.

To put on after baking

Optional  Sour Cream, taco sauce, salsa Verde, guacamole, hot sauce, shredded lettuce, finely chopped green onions and he rest of the cheese after I topped the chimichangas. ( I sat all this on the table and let them top their own.)

Boil and shred the chicken. Mix in Salsa and cheese.( black beans and corn would be good too and make more Chimichangas)

Put a generous spoonful of chicken mixture on each tortilla and roll lie=ke a burrito. Spray each one well with the cooking spray and arrange on baking sheet. I got nine chimichangas. How many you get will depend on the size of your tortilla and how much mixture you use. I needed at least 8.

Bake ten minutes turn over and bake about 5 minutes more ( or until lightly brown and crispy (oven temperatures can vary) Once both sides are crispy add cheese on top ( put the pepper jack and cheddar on half just cheddar on half since I have two that doesn’t like heat. Return to oven for a couple of minutes to melt cheese.  Then serve with condiments.

The Spanish Rice was a recipe a friend sent me so I cannot share.  It was a simple one with no meat for a side dish. Unfortunately, I used too much rice to the other ingredients and over toasted the rice.  All was going well then I had to play referee and forgot I was toasting it. I liked it, but the kids didn’t. 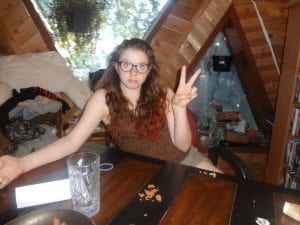 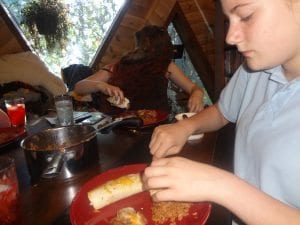 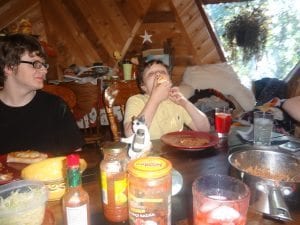 I call the meal a real winner. I will be making it again.  As a matter of fact, the leftovers I had planned for lunch became nonexistent.

Do you like to make themed meals? Did you make a Cinco de Mayo dinner?

5 responses to “Where did it all go? ~~Cinco De Mayo feast~~#foodiefriday”