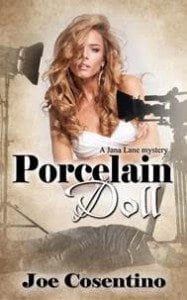 Is art imitating life in 1982? Jana Lane, ex-child star, is doing a comeback film about murder. When a crew member is killed on the set, it looks like Jana could be next. Thickening the plot is Jana’s breathtakingly handsome and muscular leading man, Jason Apollo, whose boyish, southern charms have aroused Jana’s interest on screen and off. Will Jana and Jason stop the murderer before the final reel, or end up on the cutting room floor in this fast-paced whodunit with a shocking ending.

You Can Buy a copy at Wildrose Press:

Looking for a good, clean, fun cozy with lots of twists and a very predictable ending.  Here ya go! Porcelain Doll is the second book in the Jana Lane Murder Mysteries but it does stand alone pretty well.Jana is in her 40’s and tired of sitting around in her life of luxury. Her husband is on the road all the time. the two older boys are going to summer camp leaving her with only her  younger baby.  Her agent Simon comes up with an idea of a comeback movie in her own estate so she agrees to it. She is also helping with an Aides Campaign which  gains her a few enemies. Once a crew member dies more twists start occurring and it looks like Jana is on that list.

I loved tis book. There are so many interesting characters.  A very good murder mystery plot, and lots of humor as well. My only issue was that I had a couple very small questions that didn’t get answered( I can’t say what because I don’t want to cause spoilers)…who knows maybe they will in the next book.

If you like  A fun cozy mystery, suspense, humor, and all-around clean and sexy fun this is for you.

I received a copy of this for an  honest review.

“The setting, the characterization and the plot keep you turning the pages.” The Book Mistress