All Maddox Storm wanted was to come home and hide from the world in peaceful solitude for a few short weeks. Oh, and give her soon-to-be ex cheating scumbag husband a fat headache while she’s at it. He hates all small towns, and Silver Firs in particular, with the kind of passion most men reserve for the bedroom.
So call it revenge, or call it poetic justice, but investing his savings in the town’s founding inn seemed like the perfect plan for all her needs.
But everything goes out the window when Maddox finds her arch-nemesis dead as a doormat in the kitchen downstairs.
Before she knows it, she’s embroiled in a murder investigation and tangling with the smoky-eyed detective on the case. Not that she doesn’t trust him to do his job, but he may not be quite as motivated as she is to bring the guilty party to justice. After all, she’s the one who unwittingly incriminated upstanding townsfolk and worse, she may be living under the same roof as a pair of unlikely murderers. 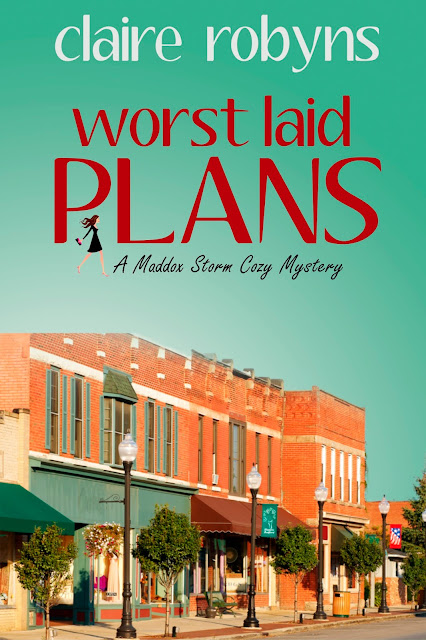 My gaze settled on the fairytale castle directly across on the opposite shore.
It wasn’t dusk yet, but the place was lit up with the soft glow of a million candle-bulb lights that spilled out onto the manicured lawn.
Lakeview Spa Retreat.
The exclusive spa was a favorite getaway for celebrities and lured all the usual gawkers and stalkers, all of which turned a lucrative trade for Silver Firs in addition to the regular wine touring crowd. It had turned a lucrative trade for Hollow House, too, until the budget hotel Fortune Paradise had gone up.
That was also the reason Joseph McMurphy hated Silver Firs with a passion most men reserved for the bedroom. Oh, he hated all small towns, said they made him feel claustrophobic. But he had a special loathing for a town that thrived on invading the privacy of the rich and famous.
I’d taken it as a testament of his undying love when Joe had given in to me and agreed to hold our wedding in my home town last year. Hah! We should just have gone down to City Hall, squeezed an hour in somewhere between a dental checkup and a matinee show.
So call it revenge.
Actually, let’s call it poetic justice.
But I thought clearing out our joint bank account to buy a significant stake in Hollow House, the evil den (his words, not mine) that housed and fed all those celebrity gawkers, had a certain dramatic flair to it. Too bad Joe had been too occupied with Chintilly Swan’s generous assets to remember his scorned wife had full signing power on the bank account.
My purse squealed like a piglet in distress, sending me into a near-state of cardiac arrest.
I thumped my chest to get my heart beating again and rushed over to dig out my cell phone before the next squeal. I considered my options as I turned the volume down, but she wouldn’t stop until she’d reached me and then I’d get the third-degree. As good an actress as I was, not even I could lie my way through one of Mom’s inquisitions.
And if you’re wondering about my mom’s ringtone, just think of it as electrotherapy. A little pre-emptive heart shock did an excellent job of putting anything my mom had to say into perspective.
That squealing piglet had done wonders for our relationship.
I hit the answer button and pressed the phone to my ear. “Mom, how are you?”
“What on earth are you doing at Hollow House and what time can we expect you for dinner?”
See? My heart didn’t even stutter.

Maddox found her husband in a compromising position with the starlet she understudied. Out for revenge she heads home and invests nearly all the money in his account in what was once a big inn in her hometown. Upon arrival she finds it running down and owned by the last fasmiky member . Mr Hollow is very strange and doesn’t trust people as Maddie soon finds out that the inn has a Butler and a cook and not much else. She also finds the cook to be her old Home ed teacher and one of the moist disliked people in town. Maddie also finds her problems growing when she finds her not passed out from drinking , but dead.
This us a cute story with lots of description. Its a bit like playing Clue with a romantic twist. I didn’t figure out the killer until about 2/3 into the story and it was pretty obvious then.
I liked Maddie and the other characters a lot. The mystery had enough twists to keep you interesting.
I will be honest and say at first it was a bit slow but once the twists began I got into it
I’ll warn you it’s a cliffhanger I didn’t see coming and now am anxiously awaiting the next book.

Two shots of whiskey later, one spiked with coffee, one neat, I’d told Jenna the whole morbid story.
“I get why you’d want to stick it to the asshat,” Jenna said after she’d cursed Joseph McMurphy from here to Iceland, “but this…?”
She swung her arms out, banging the half-empty bottle against the cabinet at her back. “If you wanted to burn his money, you should have splashed out on a round-the-world funfest. Hell, you could have invited me along.”
I laughed. “Sounds like fun, but I didn’t want to burn his money.”
“You could have fooled me,” Jenna said. “This place isn’t a sinking ship, Maddie, it sank years ago and it’s been languishing on the ocean floor ever since.”
“Joe will get his money back. As soon as he discovers what I’ve done, he’ll find another investor to buy out our shares. All I wanted was free board, beverages on the house, a place to sit it out until the divorce goes through while Joe gets a big fat headache.”
I raised my mug to Jenna, cheers, and drained the last few drops of my free beverage. “If he hoped I’d slink quietly into the night, he never knew me at all.”
Jenna wasn’t convinced. “You know what they say about the best laid plans.”
“Nothing was laid.”
“Oh, someone was definitely—” She slapped a hand over her mouth. “Did I just say that? I’m such an idiot.”
I waved her gaff aside. “And there was no devious plan. It was just an idea that popped into my head.”
Jenna still didn’t look convinced, but it was the truth.
After running the full eight blocks home from the theatre, I’d locked myself in the spare room. Right through the night and into the next day. Butt on the carpet, arms hugging my knees, back propped up against the bed, staring dry-eyed and numb-brained at the wall.
The world fell away from me.
Thinking hurt too much.
Nothing made sense.
I’d heard Joe pounding on the door, begging, cursing, threatening to call 911, begging some more, but it all wafted past me like a putrid smell I didn’t dare breathe in.
And then I’d remembered my mom saying something about Mr Hollow and the brokerage firm in Syracuse and I’d had a thought. And it didn’t hurt. It made perfect sense. It gave me focus.
Sure, I’d been dehydrated and malnourished at the time, but look at Moses. He’d gone off into the desert and fasted for forty days and nights for clarity.
“Ladies…”
My head snapped back, eyes turned up.
A smoky grey gaze pierced me, then moved on to Jenna. “Which one of you is Maddox Storm?”
I scrambled to my feet and instantly teetered to the side. I wasn’t a lightweight and I wasn’t drunk, but Jack Daniels before breakfast was breaking new ground for me.
I slammed a palm to the bar counter to steady myself and glared up at smoky eyes.
There was more to the man, of course. Crop of tangled brown hair, chiseled jaw that needed a shave, dark jacket that spanned broad shoulders, immaculate white shirt and blue silk tie, that kind of thing. But I wasn’t in the mood to notice.
“Who’s asking?” I demanded.
“Detective Bishop,” he said curtly. He flashed a badge at me, then returned it to the inside pocket of his jacket. “Auburn Detective Division.”
“Where’s Chief Matthews?”
“Hawaii,” Jenna said, sliding into place beside me. “It’s his granddaughter’s christening next weekend and he decided to combine it with his annual leave.”
The detective cleared his throat. “If you wouldn’t mind answering some questions, Ms Storm? Mr Hollow has turned the library over to us for interviews.”
Jenna’s arm came around me. “I’ll go with you.”
His jaw tightened as he set those smoky greys on her. “Private interviews.”
“That’s not a problem,” Jenna informed him. “Maddie and I don’t keep any secrets from each other.”
“And you are?”
“Jenna,” she said. “Jenna Adams.”
“I’ll have questions for you, Ms Adams, once I’m done with Ms Storm.”
“Or you could just interview us together,” Jenna persisted. “Twice the gain for half the pain.”
Detective Bishop stood back and looked at me again. “If you don’t want to be alone with me, Ms Storm, I can arrange for a uniform to sit in on the interview.”
Heat flared to my cheeks. “I don’t need a chaperone, Detective Bishop.”
His brow arched. “Are you sure?”
“Quite,” I said prissily and slipped free from Jenna’s arm to follow him.

I love to write mystery, romance and adventure, cause sometimes one life really can have it all (between the pages of a book, at least.) When I’m not thigh-deep in laundry, shopping, cooking and general crowd control, you’ll find me head-and-heart-deep in the tangled lives of my characters.
If you’d like to be alerted for new releases, please sign up for Claire’s newsletter at http://www.clairerobyns.com/p/coming-soon.html