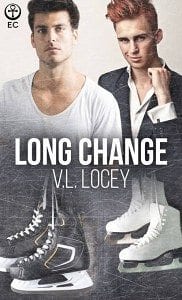 for Long Change by V.L. Locey

Collegiate superstar goalie Boone Crockett seems to have the world at his feet. He’s rich, handsome, attends an elite college and is a hot prospect for the pros. Pity all that is a front for a deeply closeted and troubled young man.

All Boone’s life plans are shattered when flamboyant ex-figure skater Preston Gordon, an orange-haired twink, shows up to audition for the team’s mascot position wearing sequins, scarves and toe picks. His moves on the ice send Boone into his own pirouette of frustrated and reluctant desire.

As senior year progresses Boone slides deeper and deeper into a dangerous depression, Preston’s sensual strength the only thing he has to hold on to. If Boone can’t keep from plunging through the thin ice he’s skating on, it could take a twink to make the big save.

I heard him as he hit the ice. Even with that stupid dog head muffling his voice, I heard every word and my body reacted with violent wantonness.

I whipped around to see him chugging around the rink, a shovel in one hand, a trash can in the other, dressed as a dog. How demeaning. I mean, really. Cleaning up after the team? Didn’t the little twink have an ounce of pride? I ripped my mask off and lumbered toward the Zamboni door. A big brown dog with a Rock Point green-and-white hockey sweater stopped right in front of me. A couple of the guys chortled. Maybe they enjoyed the look of shock mixed with terror on my face.

I drew back as he did a tight spin right in front of me, my mask under my left arm and my stick in my right.

“You’re not queer free, though, are you, Preston?” someone yelled from behind me.

The attack came quickly. One minute I was trying to make words, the next Bradley Skinner, one of our D-men, crosschecked our mascot. Preston, who was completely unprepared for such a violent hit in the ribs, went down on his ass hard then rolled into a moaning ball. I reacted on instinct. My stick found Skinner’s side. The goon spun, his face a contorted mass of pain mixed with rage. He slashed at me. It bounced off my leg pads. I skated over to protect Preston, who was lying on the ice, trying to suck in enough air.

“Why don’t you back the fuck off, Skinner? Leave the kid alone.”

I got my stick up a bit higher this time. Skinner’s head kicked back. The underside of his chin began to bleed where I had clocked him. The scrum was broken up by our team captain.

“Save it for Allegheny State!” Mike Piana barked, shoving his dark self between Skinner and me. Mike was the only black player on our team. He was sharp, fast, driven, and one of the best people I had ever had the pleasure of knowing. Skinner lunged at me. Mike gave the huge idiot a two-handed push that sent his ass soundly into the boards. “I said save it for Allegheny! Go scrub your nuts, Skinner. You smell like my jock.”

“You make sure that fucking little pansy stays out of the locker room,” Skinner spat before he trudged off with his hackles plenty ruffled.

I waved goodbye to the enforcer with my middle finger, then bent down beside Preston. He was in the process of removing his dog head. I gave him a hand after dropping my helmet to the ice.

“You okay?” I asked when I had Roddy the Rottweiler’s head in my hands. Preston nodded, his mouth drawn in pain. Mike skated off to fetch Preston’s shovel and trash can.

“Oh yes, I’m just ducky.” God, the tiny twink was mad. I didn’t blame him. “Thank you for coming to my defense but it wasn’t really needed.”

I studied him as he got to his feet, then I followed, my hand open and ready to catch him in case he teetered. He didn’t, but he seemed to be having some issues drawing in a deep breath.

“Um, yeah, it really was. Skinner would have kicked your scrawny ass,” I said as Mike returned, smiling, with a plastic shovel and a blue trash can. Preston gave me a glower as he took his puck cleaning tools from Mike. “Nothing personal, but he’s got the most fighting majors on the team. He would have knocked you into New York State.”

You can buy a copy: 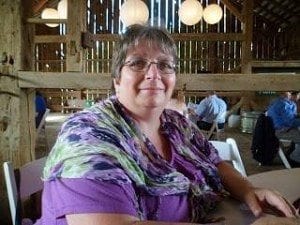 I love to meet new friends and fans! You can find me at-