Hi. Y’all Welcome to Sexy Saturday. This week I am introducing you to some Bad Boys. Do you like Motorcycle Clubs? How about Beach Bums.  Rachelle Ayala has both for you.

I asked Rachelle about her new series  Bad Boys for Hire.

Bad boys are guys you don’t bring home to your conservative religious mother. They march to their own tune, don’t follow rules, and live dangerously.

Guys who ride bikes are generally bad ass. It’s noisy, fun, dangerous, and exciting. Whenever I see a guy on a bike flying down the road, cutting in and out of lanes, and roaring around corners, I know he’s fearless. Being fearless is wildly attractive, at least to me, and that’s why I love Ryker Slade. He’s fearless, but he has principles, a code of honor.

Extreme surfers like Ken are also fearless. They get on fifty-foot waves that crash so hard, they can be recorded on the Richter scale. Ken might not have traditional career goals as a doctor, lawyer, or accountant, and living dangerously is not a stable lifestyle, especially for a woman like Jolie, who has OCD. But Ken is the perfect man: sensitive, considerate, and oh so hot. Having a surfer’s perfectly sculpted body makes him legendary and the perfect man for when that wedding goes all sorts of wrong.

First up is Ryker A dark MC(Motorcycle Club) Romance 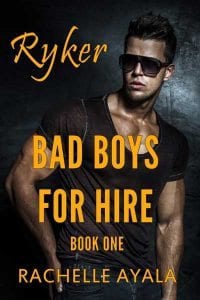 Ryker is an ex-marine and ex-biker down on his luck. He never had any plans of coming home but after an injury that got him out of the service, he returned and now can’t find a job and is living in a barn doing odd jobs and panhandling when he has to.

Terri is a florist. She is about to turn 30, is a bit overweight and has a secret past. She can be quite outspoken and harsh at times. Her friend is getting married, and she and a group of friends are working on wedding plans. Terri is a florist, one is a baker, another a photographer, they all work in the wedding planning field. One day at a weekly planning meeting they see a hot man panhandling, and Terri approaches him with harsh words. So she ends up offering him a job for the afternoon not thinking he would show.

I love Rachelle Ayala. Her stories range from sweet, to moderately sexy to this one that turns up the heat. I loved Ryker. I liked that Terri is not your ordinary sweet, perfect leading lady. She is quite the opposite. He is a broken man. There are a lot of shocking twists, and the story keeps you turning the page. My mouth dropped open several times. I even had to say WTF at the end. It was a shock but AMAZING. There is lots of sex. It’s very steamy.

If you like florists, ex-marines, biker gangs, bad boys, strong, feisty women, larger women, twists, and steamy sex, you will love this! 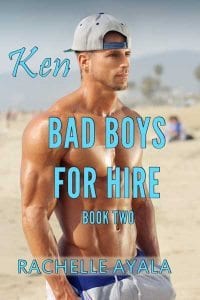 Wow! Rachelle Ayala never ceases to amaze me. Every book she writes is so unique and so good. I started reading this, and before I realized it, I was up half the night finishing it.

Bad Boys for Hire Ken is book two in the series and can be read alone as both books are so different, but you would probably enjoy it even more if you read in order since there are recurring characters, and the beginning picks up with Jolie’s wedding.

Jolie is stranded at the altar after her husband-to-be is a no show. Not only does her husband not show, everything that could go wrong does, but butJolie is also a tough woman and puts on a strong appearance at the reception.

Ken is hired to stand in as a groom at a wedding. It is an odd request but he needs the money, so he gathers is crippled sister up and heads to the venue, only to arrive too late. Nikki, Jolie’s friend, meets him at the door and offers him a different job, to go to Hawaii and woo Jolie.When he sees Jolie, he takes the job but turns down the money except for a ticket for his sister for his personal reasons.

I loved this story. It is light-hearted and so funny at times, then there are serious notes as well. I adored Jolie. I can relate to her OCD, and Allergies, though mine is nothing compared to hers. I adored how Ken accepted Jolie as she was and worked so hard to get her to recognize him and fall for him. There are a few really steamy sex scenes. There are a few twists, and I loved the ending.

If you like men for hire, escorts, beach bums, strong, passionate women, sweet romance, funny romance, steamy sex scenes and one heck of a great anytime read, I highly recommend this one. 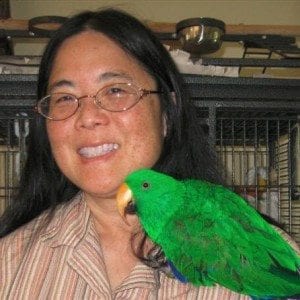 Rachelle Ayala is a bestselling author of contemporary romance and romantic suspense. Her foremost goal is to take readers on a shared emotional journey with her characters as they grow and become more true to themselves. Rachelle believes in the power of love to overcome obstacles and feels that everyone should find love as often as possible, especially if it’s within the pages of a book.

Her book, Knowing Vera, won the 2015 Angie Ovation Award, and A Father for Christmas garnered a 2015 Readers’ Favorite Gold Award.

She is also a writing teacher and founder of the Romance In A Month writing community. She lives in California with her husband and has three children and two birds.

Hello everyone. I am a writer who loves to combine romance with suspense and humor. My foremost goal is to take you, the reader, on a shared emotional journey with me as my characters grow and become more true to themselves. I believe stories are the means for us to connect and experience life in new ways. As a writer, I’m privileged to share my private dreams and visions with readers. I’m a romantic. I believe in the power of love to overcome obstacles and feel that everyone should find love as often as possible, even if it’s within the pages of a book. Happy reading and loving!

Download a FREE surprise ebook by subscribing to her newsletter: http://bit.ly/RachAyala and find her books at online retailers Amazon, Barnes and Noble, Kobo, Apple iBookstore, Google Play, and Smashwords. Borrow her books at Scribd.

You can stalk Rachelle:

Join her street team for lots of fun. There are always fun conversations, sometimes games and contests. I love it!

For more books and reading order:

Broken Build, Build engineer Jen Jones falls in love with the man whose life she ruined.

Hidden Under Her Heart, A young nurse, Maryanne Torres, struggles with a difficult decision over an unwanted pregnancy.

Knowing Vera, Playgirl Vera Custodio belatedly discovers that her father might have killed her boyfriend’s mother many years ago. [2015 Angie Ovation Award Winner]

Taming Romeo, Medical student Evie Sánchez is recovering from heartbreak when she runs into the boy she left behind.

Claiming Carlos, Restaurant manager Choco Sanchez finds herself caught between two hot men, an epic food fight, and a war to save the restaurant.

Whole Latte Love, Carina Chen, a career-oriented young woman, has no time for distractions—especially the sexy, guitar-playing barista she rooms with.

Christmas Flirt, Bad girl Lacy Reed gets more than she bargained for when her naked selfies turn up on her boss’s phone.

Santa’s Pet A brilliant girl genius plays elf to a substitute Santa and turns both their lives upside down when he is charged with a sex crime and she loses her company to hackers.

Bad Boys for Hire – Ryker Terri Martin gets caught in the middle of a motorcycle club vendetta when she tries to hire a biker for her birthday date.

Bad Boys for Hire – Ken After Jolie Becker is left at the altar, her friends secretly hire a handsome beach bum to cheer her up.

The Remingtons: Leap, Laugh, Love, A pro surfer on holiday after being attacked by a shark gets tangled up with an Army Ranger on leave with a mission.

The Remingtons: Blush of Love

Christmas Stray A couple grieving for their son is snowed in with a stray puppy and a little boy. Is there room in their hearts for a Christmas miracle?

Her Christmas Chance: A Christmas Creek Romance A woman with cerebral palsy and her tomcat disagree about the attractive ex-con next door. Will a dose of Christmas magic reach through his dark secrets.

A Father for Christmas Sweet romance between a homeless veteran and a single mother whose daughter asks Santa for an unusual gift. [Gold Award Winner, 2015 Readers’ Favorite]

A Pet for Christmas A veteran suffering from PTSD fights to return from Afghanistan and give his family their Christmas wishes.

Have A Hart Romance Series

Valentine Hound Dog A fashion designer and her basset hound puppy convince a burned ex-firefighter that beauty is never skin deep and neither is love.

Spring Fling Kitty A stray cat shows a fire chief and his fiancée’s sister that doing the wrong thing is sometimes right when it comes to love.

Blue Chow Christmas Brian and Cait are in love, but they both have secrets that could blow them apart. Can two lost chow-chow sisters open them up for true love and commitment?

Roaring Hot! A playboy motorcycle racer hires an aspiring actress when he is challenged by his grandmother to bring a real girlfriend to her birthday party.

Intercepted by Love, A quarterback hiding from his Super Bowl losing interception meets a small town librarian with an active fantasy life.

Playing the Rookie, A rookie pitcher and a sports intern on the rebound connect to get over their exes.

Playing Without Rules, A ballplayer’s girlfriend hides his daughter from him because she fears he’s like his abusive father.

Playing Catch, Catcher Kirk Kennedy has never met a puzzle he can’t solve. Until he meets bartender Jeanine Jewell. What he finds knocks his balls out of the park and could very well end his days behind the plate.

As you can see Rachelle has a little something for everyone!