Hi Y’all! We are still doing our Lucky in love month here on the Cat’s Meow. This week I have L.E. Franks sharing 6 days to Get Lucky and I am including a review for 6 days to Valentines since they do need read in order. Read on! LE has a special giveaway at the end!

I asked L.E. If she had any superstitions.

Thank you so much for including me, Cathy. In answer to your question, I only have one superstition: I have to hold someone’s hand on takeoff and landing when I’m traveling by plane. Funny I know. Like I’m going to prevent it from falling out of the sky or from running over the underpaid baggage handler on the tarmac. You never know, I always do and so far it’s worked.  Everyone who’s on the flight with me should thank me!

Wishing you all a Happy St. Patrick’s Day! Keep it green. – LE 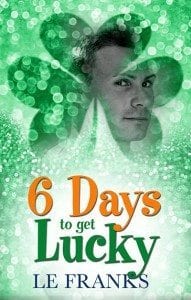 6 Days to Get Lucky

Series: 6 Days / Loves a Holiday Book No. 2 (continuation of the story after 6 Days to Valentine)

Mixologist Nick Valentine never thought love was in the cards, but after a scorching Valentine’s Day kiss from bouncer Davis “FatBoy” Newman, he’s beginning to think it’s possible. After four weeks of dry spell, Nick’s losing patience—it’s time FatBoy stop acting the gentleman and just throw him over the bar or Nick may just change his mind.

All FatBoy wants is a shot at winning Nick’s heart. As long as meddling bosses, an Irish hurling team and a bar riot don’t ruin his chances forever, he might just get lucky and take the man of his dreams, home.

In order to know who the characters are and how the relationship is like it is with Fatboy and Valentine you need to read 6 Days to Valentine:

I give it a 5 meow and 3 purrs(moderate heat)

Nick is a mixologist and basically a manwhore. He gets hs kicks in the back room, most of the time with his backup Juan. He realizes he wants more from life than backroom one-offs. His bouncer he calls Fat-boy because of his linebacker size keeps trying to hook him up with his cousin, but Nick has an idea to assure that Fatboy quit harassing him and also be his servant for a day. Nick had no idea how this could backfire on him.

I loved Nick, and this story introduces us to Nick, Fatboy, and several other characters. I felt it was a great heartfelt set-up leading to the next book.
6 days to Valentine is fast-paced, funny, sweet with some romance and leaves you wanting more.
*I was gifted a copy of this story for an honest review*

Review for 6-days to Lucky

6 Das to Lucky is the sequel or next installment of 6 days to Valentine. We pick up with Nick still not having been having sex with Fatboy. He is frustrated both sexually and for the fact that Fatboy is hiding deep in the closet and he is out and proud. We meet many new characters in this book. It is longer with a lot of action and some new possibilities of interest for Nick. Will he wait for Fat boy to decide or will he go with one of the new options?
We get more Nick, more angst, more Fatboy and his angst and more storyline. I loved it. The story keeps you on your toes, has humor and nail-biting suspense and we get some hot man-sex.
I want more! More Nick and more Fatboy!!!Please!

I was gifted a copy for an honest review

A Little more 6 days to Get Lucky:

Reaching across the empty bed next to me, I rode out the last waves of my dream alone. I could still feel his phantom kiss on my lips and the sensation of a hand stroking along my thigh.

The rest of it was just a blur of emotions and sticky residue on my sheets—though I could guess at it without much effort. FatBoy Newman had been a specter haunting me at work so it was no great leap to assume he’d shouldered his way into my dreams as well.

In fact, he was at the root of my problem: I’d been having a hell of a dry spell.

Four weeks since the most romantic kiss of my life…

Four weeks of nothing.

Fuck the South and its mythology of the Southern Gentleman—if FatBoy Newman didn’t stop treating me like a delicate flower and throw me up against a wall soon, I was going to explode.

It was six days until St. Patrick’s Day, and FatBoy had until then to make his move, or I was moving on. 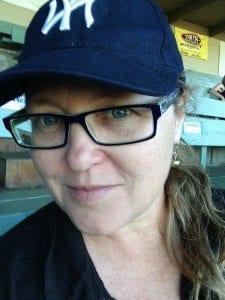 LE Franks lives in the SF Bay area and writes M/M Romance in a unique mix of humor and drama with enough suspense to produce fast paced stories filled with emotion and passion and featuring characters that are quirky and complicated and sometimes a little bit dark. Her books have hit the best-selling lists and she was a finalist for 2013 & 2014 Rainbow Awards. Her titles are available through her publishers at MLR Press, Dreamspinner Press and Wilde City Press and Pride Publishing and the usual ebook sellers.

One Lucky commenter will win a e-copy of 6 days to Valentines.  Nick is a Mixologist so in keeping with that tell LE and me your favorite mixed drink… doesn’t have to be alcoholic. I love Peach Tea!