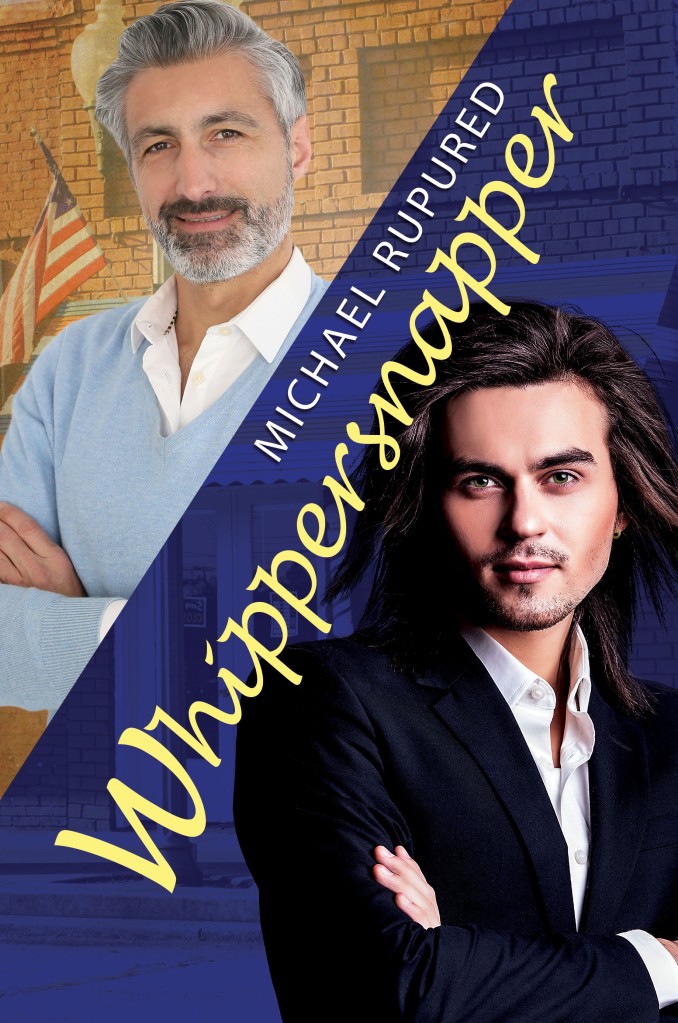 BLURB: Tellumo Magnamater is a fresh-out-of-college, first-year English teacher at Salt Lick County High School in Kentucky. He rides the bus to and from work, and every day he walks to the gym behind his small efficiency apartment to exercise. Perhaps because of being raised by two lesbians, Tellumo is attracted to older men. He sets his sights on fifty-something available bachelor Oliver Crumbly. But Tellumo isn’t the only resident interested in Oliver.

Peggy Tucker, a widow approaching her sixtieth birthday, is determined to marry again, and she thinks Oliver is her perfect match. Despite Tellumo and Peggy striking up a friendship at the gym, neither realizes they are interested in the same man. But the joke might be on both of them. Oliver, a retired history teacher, is the original crotchety old man who hates everything and everybody—especially young people.

Tellumo has just moved to a new, small town in Kentucky. He is throwing himself into work ad worried he isn’t doing well enough. The only recreation he has is the gym after school, and occasional visits from his best friend, Melody. Raised by two moms he credits that for his affinity for older men. He has his eye on one in the Gym, but the Sliver Fox seems to avoid him.

Tellumo befriends a sweet older woman he met in the gym; little does he know she is trying to get the attention of the same man.

Oliver has decided five bad relationships are enough and is trying to enjoy his retirement. He is the epitome of a crotchety older man: fussing and griping about everyone and everything. The thing that bothers him the most is the younger generation always on their fancy phones.

This story was a laugh a minute. It is also one you need to make time to read in one sitting because you won’t want to put it down.

Whippersnapper is a character driven story about three people, Tellumo,  Peggy, and Oliver. You get a well-written story about how these three meet, how their lives intertwine and a lot of surprises along the way. It is a feel-good story with no sexual content and lots of laughs. I laughed so much my hubby must’ve thought I was nuts.

Though it’s not exactly a romance towards the end there is a little bit of romance; I highly recommend this story.

If you like funny stories with lots of interesting characters, unique main characters, humor with a touch of romance, you will love this book!
* I received a copy of this book in exchange for an honest review through http://mmgoodbookreviews.wordpress.com  *

Whippersnapper: More Fun than a Barrel of Monkeys

Before I wrote Whippersnapper, I had no idea how hard writing my first three novels had been. They’re set in the past, in real places, with a lot of historical references. Making sure all the details were correct was a ton of work.

Whippersnapper takes place in Fallisville, a fictional town in Central Kentucky. Fact-checking wasn’t an issue. Everything in the story is made up.

Well, not everything. That’s what makes writing fiction so much fun. Only the author knows what’s made up and what’s real.

Tellumo Magnamater is consumed by the demands of his first job, teaching English at Salt Lick County High. A daily trip to the gym relieves stress and keeps him healthy. For months he’s admired an attractive older man he calls the Silver Fox he sees at the Fit as a Fiddle gym.

The Silver Fox is Oliver Crumbly, a retired history teacher who, after a string of failed relationships, finds himself alone again. Other than grocery stores and doctor’s offices, the gym is the only place he ever goes. The whippersnapper (Tellumo) represents everything Oliver hates about the younger generation.

Peggy Tucker is a widow with a thankless job at the Salt Lick County Department of Motor Vehicles. She joined the gym to lose twenty pounds in hopes of finding a husband. She sets her sights on Oliver too. She doesn’t know much about him, but he’s just about the only eligible bachelor in Fallisville.

Things have changed a lot in my lifetime. Some go along, some don’t. Tech-savvy Tellumo is the future. Oliver holds on to the old technology and the way things used to be with every fiber of his being. Peggy dabbles with technology, but is behind the times and constrained by her meager income.

The premise still makes me laugh, and I had a blast writing the story. Some moments make me laugh out loud no matter how many times I read them. Some scenes still make me cry, so keep a tissue handy.

Oliver Crumbly watched the Salt Lick County snowplow scrape the street in front of his house with a mixture of satisfaction and relief. Ten days of complaining had finally paid off. Two feet of snow had fallen in the day or two leading up to Christmas. A week later, before plows or salt trucks had reached Thoroughbred Acres, another six inches had fallen.

He’d been trapped at home since Christmas Eve. Worn treads had kept his Taurus from getting any traction on the flat street in front of his house. Driving out of the hilly subdivision would have been impossible.

Bill Pinkley, head meteorologist for local Channel 13, said El Nino or El Nina had caused the winter storm. Oliver couldn’t remember which, or why what happened so far away made a difference in the weather in Northern Kentucky, but if Bill Pinkley said so, it must be true. Heeding his advice to stock up on groceries ahead of the first flurries had kept Oliver from running out of food.

Thirty inches was a lot of snow to have fallen in a week’s time, and Calumet Circle was in the back of Thoroughbred Acres. Still, ten days was too long to wait for snow removal. Calls to the county road department had fallen on deaf ears. The surly customer service representative had hung up on him—four times. Miss Bethany Williams, Customer Service Representative II, was about to learn messing with Oliver Crumbly was a mistake. He’d mailed a lengthy letter detailing her incompetence and rude behavior to the director of the county road department with copies to the mayor, Oliver’s representative on the city council, and the Kentucky and U.S. Departments of Transportation.

Too bad Kevin Leonard had missed the blizzard. For eight years, Oliver’s ex had complained about the lack of winter snow. But then, nothing in Kentucky had suited Kevin. He’d grown up in the upper Midwest, where life was better in every way. Eight years of Kevin’s delusions of grandeur, condescending attitude, and manufactured facts had been a good four too many.

Oliver didn’t miss him one little bit. Not anymore. He dropped into his recliner, turned on the television, and flipped to the TV Guide Channel. His forty-eight-year-old ex had returned to North Dakota last February to live with his parents, and according to a mutual friend, was still unemployed. Because Mr. and Mrs. Leonard had often driven their camper down to Kentucky for weeklong visits, Oliver knew them a lot better than he’d have preferred. In his opinion, the sorry son and his parents deserved each other.

The viewing options scrolling on the screen at a snail’s pace failed to keep his attention, and his mind wandered. Falling for the wrong guys was Oliver’s gift. The first time his heart had been broken, he’d believed he would die. But he’d lived to love again… and again… and again… and again. Five times he’d survived a broken heart and the end of yet another relationship gone bad. Getting over kicking men out of his life had grown easier with experience. After Kevin left, Oliver’s battle-scarred heart had healed in record-breaking time.

Michael Rupured loves to write. Before learning the alphabet, he filled page after page with rows of tiny circles he now believes were his first novels, and has been writing ever since. He lives in Athens, Georgia, grew up in Lexington, Kentucky, came out as a gay man at the age of twenty-one in the late 1970s, and considers surviving his wild and reckless twenties to have been a miracle. To find out what Michael’s up to now, visit his blog (rupured.com), follow him on Twitter (@crotchetyman) or send an e-mail message to mrupured@gmail.com.

February 8: Elisa – My reviews and Ramblings

3 thoughts on “On tour with Michael Rupured~~Whippersnapper”