We finally got a little winter weather.  Sadly enough it was sleet and no snow on Wednesday, but then  Friday we got about 4 to 5 inches. It’s freezing out. The perfect time to curl up with a good book in front of the fireplace (even if it is a fake heater). 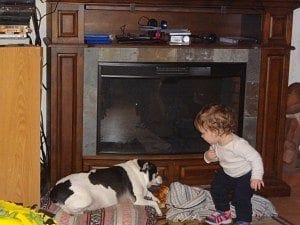 It’s also the perfect time for  some comfort food. I wanted a good beef roast but wanted something different. I decided to make a Southwestern stew. This recipe is my own creation.

I 1to 2-pound chuck roast (mine was about 3 And a half, so I sliced some against the grain for fajitas or stir-fry later in the week).

I can black beans drained and rinsed

1 can Mexi corn  not drained

A couple of tablespoons of flour

1 /8 cup olive oil or just enough to cover the bottom of a skillet.

Salt and pepper to taste

(you could substitute chili mix or taco mix here. I wanted a less seasoned stew but a bit of flavor)

Cube meat into bite-sized pieces.  Shake in the flour, some salt and pepper until lightly coated. Cover the bottom of a skillet lightly with olive oil and brown meat.

While meat is browning, add the rest of the ingredients to a crockpot. Add Meat cook on high 4 hours.

This recipe makes a huge batch, great for a family. If its just two of you freeze half, then all you have to do the next week is thaw and warm. This stew is also rather thick. If you like a more liquidy stew, add a can of beef broth or a cup of water.

We didn’t have but about half a bowl left and I had that for lunch the next day. My husband and stepdaughter loved it  and would eat it again ( hubby asked me to make it again next week.) The oldest of the three grandies liked it. But it was a bit spicy for the two youngest though I think they liked it just not the tomatoes and onions as they ate the meat beans and corn out of this.

There are carbs in this from the tomatoes and beans (you could leave out the corn and add more beans), but there aren’t any added starches like potatoes or pasta.

I think next week I will make this with ground beef add a can of beef broth and make it like soup.

Do you have a go-to soup or stew you like on a cold winters day?

4 thoughts on “#foodiefriday~~Time to heat things up”