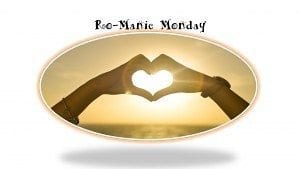 Hello everyone! Man is it hot! I  really hate the heat. My asthma makes it even harder on me to get out and do anything. But I have managed to get my rose garden replaced from the remodel and a lovely flower garden and veggie garden  in place with the help of my oldest Stepdaughter. I have several small tomatoes and a pepper already growing.  But I ramble.

June is the most popular month for weddings, then August, followed by September and October.  You can find more interesting statistics here. I was a bit surprised at what I read. http://www.soundvision.com/article/wedding-statistics-in-the-united-states

When I was younger and married the first time( don’t ask)  It was the Bride’s parents responsibility to pay for the wedding. Now that  most people marrying have been married before and are older with the bride and groom split the cost. It also seems that less and less weddings are the big traditional church weddings.   My wedding between my current husband of over 10 years was my favorite. We paid for it and I did most of the work. We had it out in my back yard in my rose garden. It was just family ( though between his family and mine we had  a lot of people and  I had several friends ad coworkers.  I wore a simple pink cotton sheath, he wore khakis and a mint green button up shirt.  I served  finger food, melon and a co-worker that does cakes for a living  made my cake as a gift. My best friend does photography so I got pictures as a gift as well.

I got married  Memorial Day weekend and we decided to go to Branson for our honeymoon since I have never been.  We saw some shows, rode the ducks( big amphibious machines that go in water ( we actually went into the river) My husband wanted to hear Andy Williams so we got tickets to that as well.We went to Silver Dollar City  and I talked him to ride the roller coasters (yes I am a coaster junkie)  We had a lot of fun and it didn’t cost and arm and a leg.

This may not sound like the most romantic wedding in the world, but it suited us just fine. and from a girl that has had the fairy tale wedding and a small private wedding with only  parents and the  this was by far my favorite. I didn’t have a digital camera back then so I don’t have pictures to share.

When my daughter got married  a year ago, she came to me  and asked me for one like mine.  So we did another simple family and friends things. It wasn’t as big as mine since My  mother passed away and my brother and father moved  too far away to come.  She wanted white chocolate cupcakes instead of a cake. Her neighbors father is  a minister and he did the ceremony at his church. It was beautiful. I do happen to have some pictures of that one. Her husband’s parents paid for them to go to St Loius for their honeymoon. 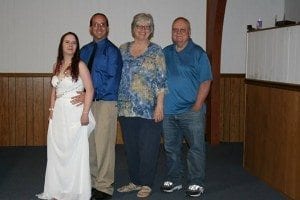 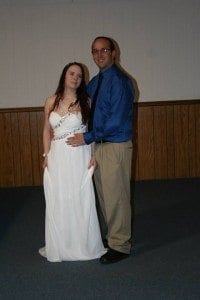 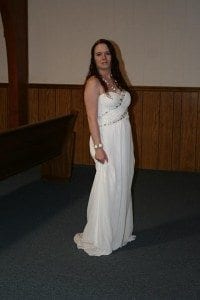 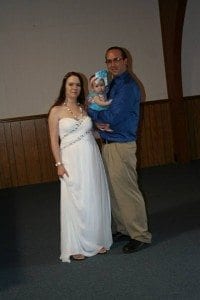 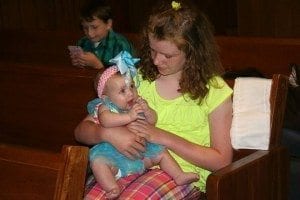 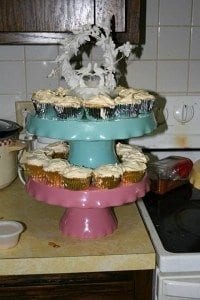 Margeret Casey and his parents…Bride and Groom… Margaret.. Bride Groom and special guest Daenerys  My Grandies Kira Drake and Daenerys  the cupcakes .

My point is that weddings are about love and romance not  about the money it costs to put into one.  It’s not the pomp and ceremony but the love behind it.  Today more and more people are without jobs or barely able to pay  bills and eat little less have a  big wedding. You can have a nice wedding  by dong it yourself and concentrate on the food instead of a lot of flowers. Pick what is most important to you, focus on that, then  find less expensive alternatives to the rest. If you want  a nice dress shop second hand or consignment stores. online clearance ( where  we found hers for only a little more than 100 dollars. Make our own cake…cupcakes are the new cakes and easier to transport and serve.  Create magic and memories not heartache and big  bills to pay off in the future.

Did you have a big fancy wedding or a small simple one? Do you have any tips on having a beautiful wedding without spending a lot of money?

2 responses to “Here comes the Bride”